As part of the Safe Trad project we have spoken to some of the leading figures in the traditional music community about what they do to keep themselves physically well in order to play, perform, teach and tour without injury. Liz Carroll (fiddle), John Doyle (guitar/vocals), Gay McKeon (uilleann pipes) and Janet Harbison (harp) each comment on their own experience in relation to the traditional music environment, awareness around injury, posture, and self-care. Click on their image to follow their stories. 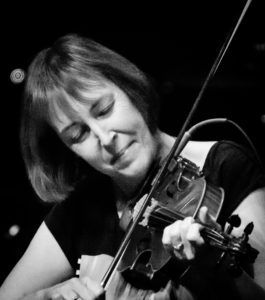 Liz Carroll is an Irish-American fiddler, composer, and recording artist from Chicago. At the age of 18 she won the Senior All-Ireland Championship. Since then she has been honoured with many accolades, including a nomination for a 2010 Grammy, with John Doyle, for their duet album, Double Play. In April of 2011, Liz was awarded the Cumadóir TG4, the first American-born composer honoured with Ireland’s most significant traditional music prize.Liz has toured as a solo artist and with the Greenfields of America, Trian, as the duo Liz Carroll & John Doyle, String Sisters, and now as a duo with guitarist and pianist Jake Charron. She has recorded fourteen albums – most recently Half Day Road, released in February 2019 with guitarist, Jake Charron – and has appeared on many more. As well as her distinctive fiddle style, Liz is particularly noted for her compositions within the traditional music idiom, many of which have come to be considered as standards within the tradition. 185 of her tunes are published in Liz Carroll: Collected (2010). It is these tunes, as well as Liz’s vital performances on concert stages, television and radio, that have established her as one of traditional music’s most sought after performers. Neil Tesser of the Chicago Reader marvels that “her quicksilver lines can captivate violin admirers way beyond the bounds of Hibernia.” P.J. Curtis of The Irish American says that Liz “conjures up a dizzying mixture of the sweetest tones, the fastest runs, and the most dazzling display of musicianship imaginable.” One of Liz’s proudest concert moments was at the 1st American Congress of the Violin, hosted by Yehudi Menuhin. In 1994, the National Endowment for the Arts awarded Liz a National Heritage Fellowship for her great influence on Irish music in America, as a performer and a composer. First Lady Hillary Clinton presented the award which bestows national recognition on artists of international stature. 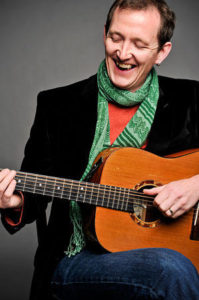 John Doyle. From a musical family in Dublin, John’s influences include well known Irish, English and Scottish folk singers including his father, Sean Doyle – probably the biggest influence of all. John first went on the road at the age of 16 with the group Chanting House which he formed with Susan McKeown and which eventually included such great players as Seamus Egan, Eileen Ivers, & Donogh Hennessy.  John went on to form the highly acclaimed super group, Solas, with Seamus Egan, John Williams, Karan Casey and Winifred Horan which took the folk and Celtic music worlds by storm, in no small part due to John’s powerhouse rhythmic guitar style and innovative arrangements. As part of Solas he received three NAIRD awards and a Grammy nomination for the band’s self-titled first recording. After leaving Solas, John has gone on to perform and tour with other greats in the Folk, Celtic and Bluegrass worlds – as music director for folk icon Joan Baez, guitarist for Mary Chapin Carpenter, Liz Carroll, Eileen Ivers, Tim O’Brien, Linda Thompson, Kate Rusby, Cathie Ryan, Cherish the Ladies, and many others. A left-handed player, his style involves the use of bass string damping with the heel of the left hand combined with a constant, metronome-like strumming pattern and nimble movement up and down the neck with the right hand to incorporate bass lines and chordal variations. Combined with other dynamic techniques such as string choking with the right hand, the resulting sound is full and highly rhythmical. Doyle plays guitar in many different tunings, but is perhaps best known for using the ‘Dropped D’ tuning (DADGBE) for backing up other musicians. In recent years, John has focused primarily on writing songs based on the varied experiences of Irish emigrants. 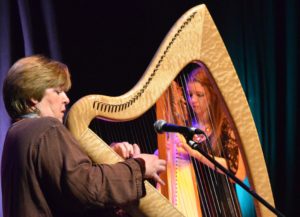 Janet Harbison. Born in Dublin, Harbison first came to prominence in the 1970s as a winner of national and international harp competitions. She studied music at Trinity College Dublin, the Dublin College of Music and Cork University and in 1984, moved to Belfast, where she was awarded a two-year Research Fellowship at the Institute of Irish Studies at Queen’s University. She was also awarded an honorary doctorate from the University of Ulster, a Flax Trust award for her work with Irish music and Education toward Mutual Understanding (Peace and Reconciliation) in Northern Ireland, and several awards for her work with the Belfast Harp Orchestra. In 1983, Harbison established Clairseoírí na hÉireann (the Harpers’ Association) to support traditional harping and oral teaching. The association organised monthly harp sessions in Dublin (at the Piper’s Club, Henrietta Street), managed harp festivals and summer schools and established weekly or biweekly harp schools. From 1986-1994, Harbison held the position of Curator of Music at the Ulster Folk and Transport Museum, where she organised an annual calendar of events, festivals and conferences. From 1994, Harbison took up the position of CEO with the Harp Foundation and in 2002 she established the Irish Harp Centre inCastleconnell, Co. Limerick, a residential harp school and college. Her teaching has been at the forefront of the Irish harp revival with many of Ireland’s most prominent performers emerging from her school (including Michael Rooney,Gráinne Hamblyand Laoise Kelly). With her teacher and examiner training courses, her method is now in use throughout the harping world and her technique training (the “Chimes”) is in universal use. Currently, Janet Harbison is Visiting Professor of (Irish) Music at Ulster University, Derry, N.Ireland (2016-20–). irishharpcentre.com 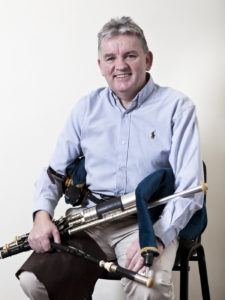 Gay McKeon. Uilleann Piper and CEO of Na Píobaírí Uilleann, Dublin Gay McKeon comes from a Dublin family noted for their involvement in Irish music. His father Tom was one of the activists who kept the Dublin Pipers’ Club running in the mid-years of the last century. Gay McKeon took an interest in uilleann piping in the 1960s under the tutelage of piper and pipe-maker Leo Rowsome at the Piper’s Club on Thomas Street in Dublin’s city centre. Leo had a profound influence on Gay’s playing as did the other musicians who taught at and visited the Club. After Leo Rowsome’s death in 1970, Gay sourced much of his repertoire from published collections.

Since the mid-1970s Gay has toured and recorded extensively with artists including Christy Moore, Maddy Prior and June Tabor and has featured on many albums including The Drones and Chanters Volume 2 and The Piper’s Rock. He has released a solo album Irish Piping Tradition, and a trio CD The Dusty Miller with his two sons Conor and Seán, both award-winning young players. Gay has performed on three volumes of the tutor series The Art of Uilleann Piping and produced and directed publications including thePiper’s Choice DVD series and numerous CD recordings published by Na Píobairí Uilleann. He was on the Board of Na Píobairí Uilleann from 1987, when he became Secretary. He subsequently served for five years as Treasurer and later as Chairman (2002-2006). In 2006 he took on the job of CEO. Under his direction, Na Píobaírí Uilleann continues to grow from strength to strength with McKeon leading on innovative projects around pipe-making, teaching (nationally, internationally and online), and building a resource base specific to the instrument. pipers.ie